My wife was born and raised in Seven Hills. In the past 17+ years I've known her and her family, nearby dining spots have always been a bit of a problem. If it wasn't D'Agnese or Corleone's there just wasn't that many places to choose from in terms of good places to eat.

Before my in-laws went back to FLA we decided to try the recently opened Eddie's Pizzeria Cerino. First off let me say that the exterior and the interior are very well done. I always love going to a restaurant that is as nice on the inside as it is on the outside. It isn't that it's lavish or anything, but you can tell that a lot of time was spent on the overall concept - and it shows.
We went on a weeknight and it was a full house. After a twenty minute wait we were seated. The service was prompt and friendly. The food arrived in an appropriate amount of time.

If I had to compare the pizza to something it would probably be most like California Pizza Kitchen. I don't think it tastes as much like CPK as much as it looks like it. I tried the Italian Blue Smoke which was topped with balsamic infused bbq sauce, chicken, pancetta, caramelized onions, mozzarella, and provolone cheese. I thought it was a really good pizza.

My in-laws enjoyed the Italian Chef salad and the pizza they shared with me. Regina didn't really care for her Eggplant and Wild Mushroom Melt sandwich. I will tell you, though, that she's very particular about her eggplant. Everything gets compared to the eggplant from Primo's in Philadelphia. (I just shake my head when she orders it because I know it won't meet her romantic idea of eggplant).

I'd be curious to know what pizza snobs have to say about EPC. While it may not be the best I've ever had it certainly fills a huge void in the Seven Hills/ Independence area. They decor and of food is a notch above your typical pizza joint and fun night out. I'd recommend it for a cheap night out.

The only time we ever really make it to Hudson is when there is something we might be attending in Akron or the surrounding area. Downtown 140 has been on my radar for quite awhile, but it's just a little outside the range (much like Thyme in Medina) of distance to solely go for dinner. Since we went to the Kimono as Art exhibition in Canton (which was unreal), we figured it was a perfect opportunity to stop in Hudson on the way home.

Downtown 140 is located in the downstairs of the historic main drag of Hudson. We entered through the stairwell that faces the street. If you're not in the know (like us) you end up walking through the dining room to the "front" the hostess stand. I guess I'm trying to say park and enter behind the buildings and save yourself the hassle. The back is the front.

The dining room is dimly lit. If you're older, like my father-in-law, bring some sort of light so you can read the menu. The decor has a modern bistro feel to it. They did a very nice job with the long narrow space. They could have jammed more tables along the wall, but they didn't. I appreciate that, we midwesterners enjoy our personal space.

The menu is similar in price to what you would find at Parallax. I ordered the Crispy Chicken which rivaled Zach's chicken at Parallax; it was that good. It was a perfectly cooked chicken breast with a crispy outside that was absolutely loaded with flavor. Regina had the Berkshire Pork Chop that was nice and thick with a good char on the outside. Thinking ahead she saved a nice piece of fatty goodness for the last bite.

By the end of dinner we were stuffed. I can't comment on the desserts since there was no room left. From cursory look we had, though, it didn't seem too extraordinary.

The service (which isn't a huge deal for me) was very professional. They were attentive without being up your ass.

I'll be back, no question about it. If you're in the area or you don't mind driving, you've got to go. Make sure you get a reservation as there was no sign of a recession in this dining room.

My brother-in-law texted me on Tuesday and wanted to know if I was interested in going to Fathead's. A mutual friend of ours, Derek Wilson (Great Lakes Brewery, Sushi Rock), has been working his tail off for the last few months getting things ready. Since I had been down at the Masters I, unfortunately, wasn't able to come for the opening. Well, I had to stop in Lakewood to pick up my taxes so I figured lunch would be the perfect time to go.

When you walk in the door the first thing that hits you is the yeasty smell of the brewery (which is to your right). The bar/waiting area is the first room you walk into. It's big. Actually, the whole place is big - the bar, dining room(s), and game area. I was really surprised at how big it really was.

So we sat down and I ordered beer straight away. I ordered the "#1" which is Belgian saison ale. Later I found out that I could have had a sampler. Oh well, next time. The beer list consists of 9 beers they brew on the premises along with a modest assortment of about twenty beers brewed elsewhere.

The menu is basically large portions of bar food. There's quite a bit to choose from what they call "headwiches" which are about the size of your, well, your head - to salads, sandwiches, pizzas, smokehouse specials, and burgers. All burgers come with fresh cut fries and homemade chips come with all other sandwiches. The chips remind me of those at Brazenhead in Columbus. They're really good. I actually prefer them over fries. I think some dipping mayo a la Brazenhead and Bar Cento would be a nice addition to the menu.

I ordered a hot Fat Italian that consisted of much pork, provolone, banana peppers, and hard boiled eggs. Very good. In all honesty, it's the smoker that I'm really intrigued by. Since I had been in the South for the previous eleven days I was a bit bbq'ed out. The next time I come I will be getting something from the smokehouse portion of the menu.

All told, I think this is going to be a wildly popular place. I can definitely see Fathead's attaining a Melt, Cleveland Taphouse and Bar Cento cult following.

Before we left the Big Island we asked Greg, our B&B host who used to live in Maui, where some good spots to eat were. Though many of the places Regina had on the list Greg had mentioned. However, Paia Fish Market was a place we hadn’t planned on going to.

We landed in Kahalui and hopped in our super cool Bio Beetle. From the airport we decided we wanted to stop in the small town of Paia at the base of the Hana Highway. 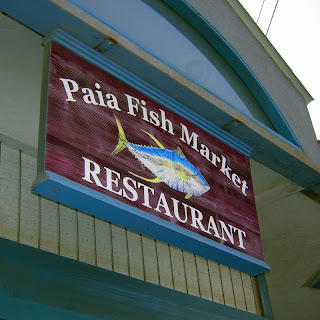 Located on the corner of Hana Highway and Baldwin Avenue, Paia Fish Market does one hell of a brisk lunch business. Lines are long and space is limited. This small eatery capitalizes on every square inch of space they have. Because space is so limited, there is an overhead storage space that is accessed by a ladder that is placed in the middle of the dining area. Seating consists of communal tables of 8. 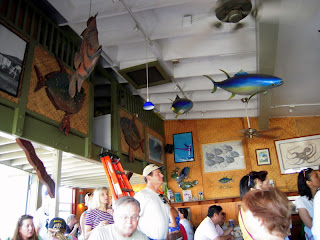 The portions at PFM are generous. They offer an assortment of burgers, sandwiches, fajitas, and pasta.

The vibe is fun, the place was clean, and the food was a good value. Is it a must try? I’d say, probably not. If you should happen to be in the area I would certainly give it a try.