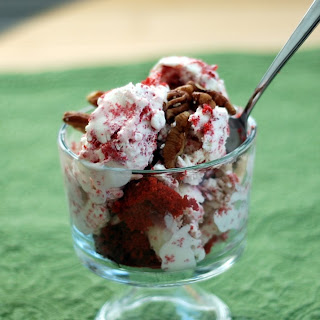 Hubby loves Red Velvet Cake. I love ice cream. We both love ice cream mixed with cake. Therefore, I decided to see if I could pull off a concoction that married the best of both worlds.

Red Velvet Cake recipes are everywhere…so much so that I was overwhelmed by the options I found on the Internet. Some call for butter, others use oil. Almost all call for a generous serving of red food coloring (Though, I did see at least one recipe that used beets to dye the cake).

I finally settled on a largely reviewed and positively received recipe for Red Velvet Cake from Epicurious.com. I can’t comment on the entire recipe because I stuck strictly to making the cake (sans berries and icing). The cake was surprisingly light and made waaaay more cake then I would ever need for this project. Next time, I’ll cut the recipe in half.

For the ice cream, I went to the source: Dave Lebovitz’ “The Perfect Scoop” and was delighted to find a recipe for Cheesecake Ice Cream. When I went to make the ice cream base I averted almost near disaster after opening the package of cream cheese at 10pm to find that 2 ounces were missing…I must have used some before and forgot about it! A wonderful resource that had I just discovered earlier that day helped me do some quick conversions to account for having less cream cheese than the recipe called for. I tasted the mix before chilling and it was perfect…tasted just like cheesecake.

When it came time to actually make the ice cream, I decided to briefly chill in the freezer the bite size pieces of red velvet cake that I wanted to mix in. I then added them as I transferred the finished ice cream into the container, finding that they broke apart pretty easily.

My husband, the Red velvet cake afficianado, declared that the finished product tasted just like a piece of red velvet cake with cream cheese frosting, but colder. We augmented the final dish with some buttered pecans and extra pieces of cake. Revisions for the next batch will include adding larger pieces of cake, and possibly some of those yummy pecans.

Zest lemon directly into a blender; add sour cream, half and half, sugar, salt and cream cheese. Puree until smooth and chill in fridge at least 24 hours.

Churn mix in ice cream maker according to manufacturer's directions. Mix in chilled pieces of red velvet cake as you transfer ice cream from the machine to its container. Freeze, wait patiently and then enjoy!