Crostatas is a relatively new restaurant located in what I feel is the middle of a culinary wasteland. I think it's the first time I've ever taken a special trip to visit a place out in the Highland Heights area.

As we pulled into the parking lot at 6 o'clock on a Friday evening, the first thing that jumped out at me was that the place looked pretty damn full. As it turns out there was already a 30 minute wait. Here's a tip: if you have a hard time finding a parking spot, it's probably going to be at least 45 minutes. Reservations are only available for parties of 7 or more.

The building is brand new. The interior is smartly decorated. There aren't any hokey murals or fake stucco on the walls (which is nice).

The pizza making area is in full view of those waiting in lobby as well as most of the people that are eating in the dining room.

Without looking at the menu I was already intrigued by what I saw coming out of the kitchen. As the servers would walk by I kept thinking to myself, "Oh, that looks good! That looks good! And I want one of those, too!"

If one thing that jumped out at me was that the ingredients appeared to be of a high quality. Servings were reasonable, yet not obscene. Me, personally, I like reasonable portions. 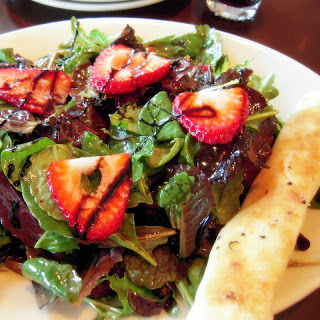 I decided to kick things off with an Insalata Mista which came topped with sliced strawberries and a drizzle of balsamic vinegar. I normally don't get too excited about salad, but I have to say that the balsamic vinaigrette they used on this was pretty thick and sweet. If you look at the picture you can see just how thick it was because it holds its shape exactly where it was drizzled. This was a very simple salad I thought was a great value at $4.50. 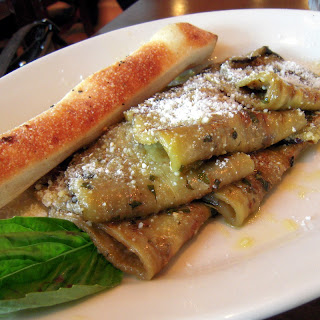 Regina decided on the Grilled Eggplant marinated in olive oil. The serving was huge. Since the serving size was so sizable, she decided to take half of it home. 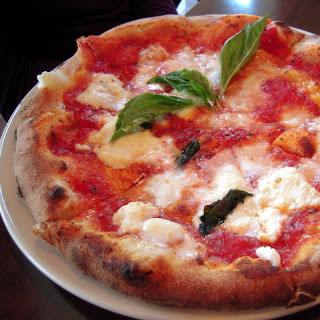 With an eye on dessert we decided to split a pizza. My favorite traditional wood fired pizza is from a place near Pittsburgh called Il Pizzaiolo. They make a margherita pizza with DOC mozzerella bufala that is out of this world. Since the DOC option is also available at Crostatas we decided to go with that (Regina got ricotta cheese added to her half).

The pizzas are done just like they are over in Italy. Personally, I've had enough of this type of pizza to know that if done well, they taste similar to each other. The pizzas here fall into the "done well" category. Are they the best? I'll let you decide. For me it's a question of doing them right and doing them wrong. Crostatas does them right. 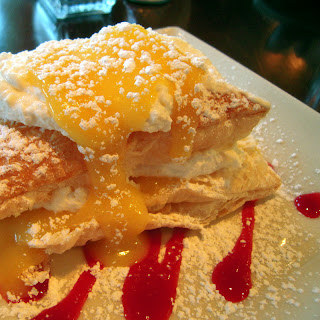 For dessert I had the Napoleon Limone which is French puff pastry with lemon curd, whipped cream and raspberry sauce. There were a lot of these desserts coming out of the kitchen, so I decided to join in. I know I'm sounding like a broken record here, but this was very good and looked much bigger than it actually was. It was a nice summery way to end the meal.

Regina is all about pistachios. Period. She ordered the Spumoni with the requisite extra whipped cream. Another hit.

All told, I thought it was a wonderful meal. The food is true to what they're trying to do. While the pizzas are on the high side (for 12"), I think it's important to note that the quality of the ingredients present a case for the prices being charged. If you, or someone going with you, are expecting the typical Cleveland-ized or even New York Style pizza, I'd go someplace else. You're probably going be disappointed. If you like authentic Italian wood fired pizza, you have to come here.

The website is severely lacking (is now fully functional and informative), so but I've included a scan of the menu anyway. 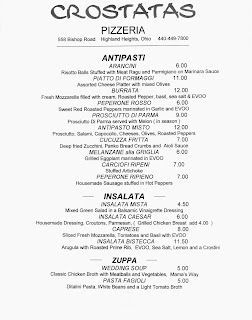 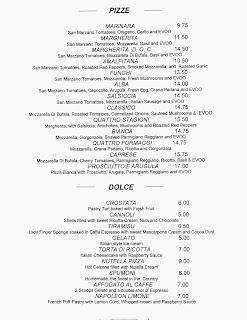