I'm always a sucker for a good list. Depending on the credibility of the source and any other supporting buzz I can find on these here internets, I typically file any little nuggets away on a food map for that particular city, for use at a time of my chosing.

Within the last six months, Slice did a writeup on Sotto in LA. The pictures just looked too damn good to pass up. I mean really. There are things that you see and you think, "Oh wow, that looks cool." And then there's, "The next time I'm in [city name], the trip will be a total failure if I don't get to [restaurant, store, bar].

Nestled underneath the well known and more visible Picca, this cozy little eatery offers a stylishly comfortable setting. Tables made of re-purposed wood, vintage incandescent bulbs, and an aged wood slatted ceiling combine to give the diner a casual yet refined dining experience.

Since we went into dinner knowing we were going to be stopping for ice cream afterward, we made the decision to limit ourselves to a couple of appetizer/sides and a pizza. 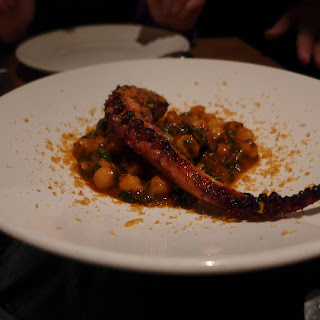 On the recommendation of the server we started things off with the tomato braised octopus served with beans.It was probably a little more chewy than I would have liked it, but the braised tomato 'stuff', along with the char of the beautiful tentacle was noteworthy. 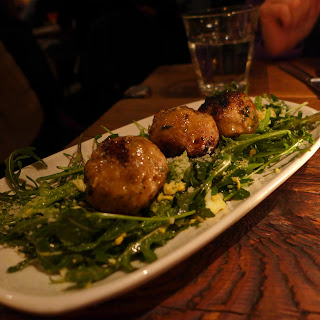 The pork meatballs served on arugula and shaved english peas are not to be missed. With pecorino cheese mixed into the actual meatball, and a healthy amount of char on the outside, the tastebuds dance with joy. I really thought this was a really well thought out dish. 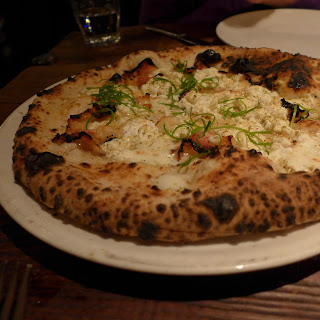 For the grand finale, we were served the Guanciale pizza topped with ricotta cheese. The first thing that really jumped out at me was the uniform rhythm of minute spots of char (leopard spots). These aren't only visually striking, but more importantly deliver an evenness of char flavor to every bite. The upskirt actually had larger spots that were much more irregular in their overall spacing (thankfully they weren't large enough to the point where you get a mouth full of "burnt"). The cornicione had a soft doughiness to it that was closer to dense than airy.

Not to be outdone by the crust, the marriage of toppings was a finely tuned counterbalance to its companion. My hesitation with ricotta is that it can release a lot of moisture into the crust underneath, leaving a soggy mess. Sotto uses a cheese that holds its shape without being thick and grainy. We both thought there was another cheese on the pie, but our server said it was just ricotta.

As far as guanciale goes, this rendition registered high on the flavor/texture scale. So many times you see long flaccid pieces of cured pork jowl just laying in a sea of cheese. Their pieces were cut a little smaller and chunkier which made them sit at an angle allowing them to crisp up (in many cases charring) in the hot oven. From a texture and taste standpoint I thought it actually mimicked the crust perfectly.

If I have one criticism it's that there are no sides or appetizers that are primarily vegetables - namely those of the green variety. I'm not asking for a whole range of veggie dishes, but at least a couple to choose from would be nice. Lately it seems this is becoming more and more prevalent. I'm not sure why, but vegetables seem to be endangered species these days.

As you can probably tell, I enjoyed my visit. The vibe of the space is very inviting, our server was helpful and attentive, and the food was excellent. If I had to compare it to someplace on the East Coast, I'd say it reminded me a lot of Paulie Gee's in Greenpoint, Brooklyn - similar decor, vibe, and service (although not as heavy on the music). Sotto certainly belongs on any LA list for 'must try' wood-fired pizzas.