The Value of Customer Service

I'm the kind of person that believes you get what you pay for. My experience is that if it's priced like a piece of junk, it probably is. Side note: the one kitchen tool that defies this logic is the Benriner mandoline. Some of these mandolines go as high as $300, but this little $27 beast is all you ever see people using. I don't like replacing things. I want to buy them once and not have to deal with the frustration of untimely malfunctions, or crummy designs.

On New Years Day I decided to sit down and write a couple of emails to companies who's products were failing me. My Thermapen had a stress fracture that was slowly making its way across the face of the display. I knew I was a few months over the warranty date, but figured I'd give it a shot anyway. The second email was to Microplane. An Ultimate Citrus Tool 1, which I bought because it was three zesters in one, developed these cracks in the plastic around the periphery that caused it to flex when you used it. I attached a couple of pictures illustrating the problems for both and then sent off the emails.

I figured it would be a week or more before I heard from them.

Thermoworks got back to me two days later, their first day back after the holiday. They gave me a case number for the return and told me to send it in so they could look at it. I'm not certain, but I think I ended up sending it out to Utah. By the following Thursday I received a brand new Thermapen in the mail. From the initial complaint to receiving the replacement (from Utah no less) took under 10 business days. There was no argument about the warranty. No charge for repair. A brand spanking new Thermapen. I was pretty chuffed at the experience from beginning to end.

Microplane got back to me four days later. The customer service person stated that their products are dishwasher safe and that the plastic should not have reacted that way. She told me to trash the one I had and asked me for my address so they could send me a new one. Within three business days a brand new Ultimate Citrus Tool 2, arrived in the mail. Again, from beginning to end it took less than 10 business days. 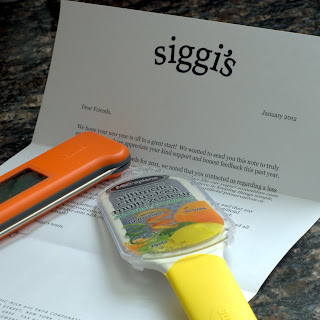 Once a week my wife indulges in a siggi's Pomegranate and Passion Fruit yogurt. One day last summer she went to open the container and it was filled with mold. My guess is that the seal around the lid wasn't airtight and as a result - mold. She contacted siggi's about the problem and within a few days (from Iceland, the Icelandic postage gave them away) sent her an apologetic letter about the mishap along with a generous number of gift certificates and coupons. More so than the free stuff, the letter was very heartfelt and the response time was off the charts.

I open the mail the other day (February, six or seven months since the aforementioned bit) and there's a letter from Siggi's. THEY FOLLOWED UP on the previous complaint!

"We wanted to send you this note to truly express how much we appreciate your kind support and honest feedback this past year...Looking back into our records for 2011, we noted that you contacted us regarding a less than perfect product form siggi's."

More coupons and more gift certificates fell out of the envelope. Are you kidding me? The Icelandic banking system may not be worth a damn, but these siggi's yogurt people are something else! We were both gobsmacked.

I write about these stories, not because I want you to go out and get upgraded stuff or gift certificates, but because I think it shows what can happen when a company is told about a shortcoming or design flaw in their product. I could have just as easily gone on the internet and flamed these companies through review websites, or whatever. But I'd like to think that, given the chance, most companies (especially if they're premium brands) are going to try to make things right. After all, you get what you pay for.