Always on the pizza prowl, I gave DeGaetano's Village Square Pizza a shot. The decor is what I'd call "Seventies Rustic". Is this necessarily a bad thing? I don't think so. It actually has the look and smell of the pizza parlors of my youth. For me, nostalgia is a fun thing. A sort of smell time machine, if you will.

Since I was just ordering carryout I didn't really have a full fledged service experience. An older man who walked in a hunched over manner was the one that rang me up. I'm assuming he was the owner because, well, he just had that "I own this place" way about him. Very nice man. We shot the breeze for a few minutes while they finished up my pie. As far as I can tell the people here were friendly, the place was clean, and they accepted credit cards.

When I got home and opened the box, the first thing I noticed is that the pizza crust looked liked it had just stepped out of the office of Troy + McNamara. This is easily the most voluminous crust or cornicione in all of Cleveland. Some serious extra bread on this sucker. 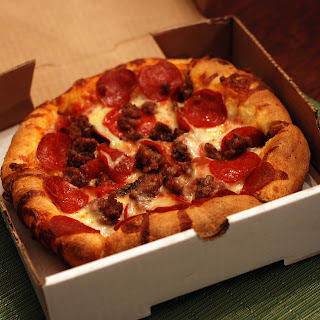 Is that a crust in that box, or are you just happy to see me?
The portion of pizza that lies underneath the cheese is actually quite good. I thought the blend and amount of cheese was appropriate and the sausage was actually above average for this city.

In Philadelphia they have a term called "gutting". Sometimes when a sandwich has a ton of stuff on it, or comes with a massive amount of steak people will order it gutted. The steak or hoagie shop will scoop out the doughy interior of a crusty (Sarcone's or Carangi's) or the softer (Amoroso's or Del-Buono's) roll to help accommodate the meat. It aids in what one can best characterize as jaw fatigue.

Why all the talk about gutting? This was the first pizza crust I ever had to gut. The crust alone is an absolute beast - Adam Richman  kind of stuff. DeGaetano's is worth a shot, even if you only go once. I thought the pizza was pretty solid, and at the very least was more interesting than your average neighborhood pizza joint. Who doesn't enjoy jumping into a pizza time machine every once in a while? If time machines aren't your thing, maybe gutting your first pizza crust is.