It 's no secret that I go creapin' (to borrow a Jersey Shore term), for barbecue whenever I have the chance. Typically, the suspect the neighborhood or the operation, the better. King Ribs got a write-up that said you had to try the ribs. Since I was charged with burning an afternoon while my wife attended a conference..well... what was a brother to do?

King Ribs - at least the one I went to - was a carryout only, hole-in-the wall type place. A black board with the white letters you wedge into the grooves, spells out a rather limited menu of ribs, chicken, and a choice of pulled pork, beef, or chicken, and four side dishes.

The store consists of a counter and a walled off windowed kitchen. It's a pretty sparse, bare bones operation they have here. Surprisingly enough they do accept credit cards. It totally looks like a cash only operation, but who's complaining? I ordered a pulled pork sammie ($4), 1/4 chicken ($3), baked beans, and cole slaw ($1.39 ea.). From the kitchen the cook asked me if I wanted hot, sweet, or mixed sauce. Not knowing exactly what their idea of "hot" was, I asked for the mixed, thinking that if hot was in fact hot at least the sweet would cut it down a little bit. Everything was packaged up in less than five minutes. 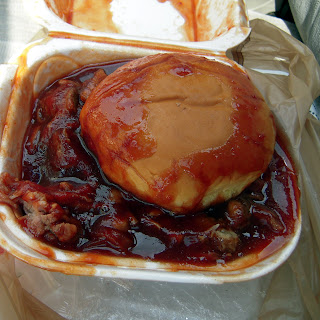 What the....?
I got everything back to the car and opened it up. Be warned: sauce....lots and lots of sauce. Much like makeup, lots of sauce means that someone is either trying to hide something or has poor self editing skills - King Ribs falls into the latter category. The pork and the chicken had a good flavor and moisture to them. The sauce - even though it was way too much - was actually a nice blend of spicy and sweet. I would do the mixed sauce again in a heartbeat. The sides were another story. The coleslaw had WAY too much mayo in it. Inedible. The baked beans weren't much better. I think if they actually added a little pork and maybe stirred in a little of that mixed sauce into them, they could actually be pretty good.

Would I specifically seek these guys out again? If I lived in the area, I'd order the meats they sell, with the sauce in the side. I'd skip the side dishes all together. I will say that if you are after a heavy smoke influenced meat, this is not that. As far as a visitor to the city, if you're hardcore I'd give it a shot, but if you aren't into eating 'cue in your car you'll probably want to skip it.