Island Cuisine: "Where they fucked up the sign - but not the food." 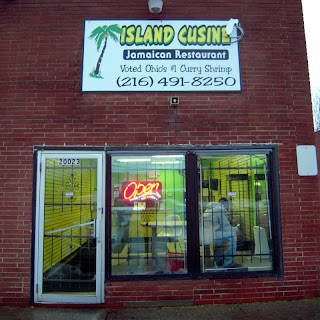 
I'm an underdog guy, so I'm not going to harp on it too much due to the ethnic element. In their defense they certainly aren't the first ethnicity to misspell the word "cuisine". Wanting to make sure there wasn't some sort of alternate spelling I didn't know about, a quick search on Google revealed that pretty much every different ethnicity has made the same spelling mistake. I'm sure the people at Island Cuisine are breathing easier now. But seriously, fix the sign (it is spelled correctly inside in the restaurant).

Ironically enough, the correctly spelled "#1 Shrimp Curry in Ohio" portion of the sign is what lured me in. I'm not sure who handed down this verdict, but if IC thought enough to emblazon it on a sign, it had to be good - right? 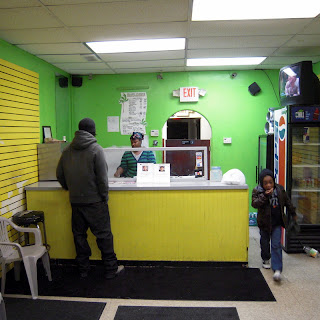 This is effectively a carryout joint. The inside is neon green and canary yellow. One table with chairs sits in the picture window of the store. A few other chairs are scattered throughout the space for the sole purpose of taking a load off while they get your food together. 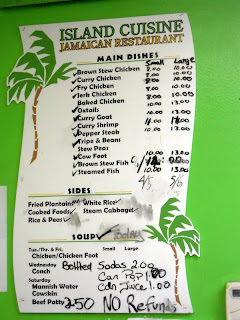 The Menu (Note the correct spelling at the top)

I've eaten here three times, and had the shrimp curry twice and the jerk chicken once. IC's shrimp curry is certainly something to take note of. Their curry is a layered flavor that doesn't pack a stinging heat like you get with some of the Thai or Indian curries. I also found the savory rice and beans to be a great counterpoint to the seasoning of the shrimp. Recommended.

What I would not recommend is the jerk chicken. For the money, I'll go to Tradewinds over in North Randall. When I order jerk chicken it has to have a decent kick to it. I want a nice discernible jerk crust on the outside of the chicken. Island Cuisine's relies on a thin almost soup-like gravy to season the meat. Maybe it's been marinated with the jerk, but it's a pretty weak flavor. While I didn't care for the sauce on the chicken it did taste really good when it seeped into the cinnamon and nutmeg of the rice and beans.

Island Cuisine isn't going to wow you with their atmosphere. You won't find any takeout menus, a website, or curiously enough spoons. (Which I find odd, since they serve soup.) I would, however, suggest an order of curry shrimp called in ahead. What IC lacks in refinement, they make up for in soul.