This little pizzeria sits just off the intersection of Wilson Mills and SOM Center Rds, in Mayfield. Since I had never heard anyone really talk about the pizza here, I figured I'd stop in the next time I went to Microcenter.

The store itself is very clean and is decorated in the style of Pizza Parlor Chic. Red checked table clothes, faux stone arches, and a rustic fireplace round out the interior. The takeout counter sits at the front of the shop with testimonials to the late founder of the business. I forget his name (something along the lines of Big Pete), but the stories that were posted in the front of the store described a larger than life character. In his pre-pizza career he was the owner of a landscape company, but saw this little shop as something he'd like to do in his older years. He has unfortunately passed away, and now his daughter now assumed the company reigns.

I ordered a pepperoni and sausage pizza to go. When I get home I was struck by the fact the sausage was cut into cubes. I had never seen this before and instantly thought, "Wow! What a good idea! I bet this is going to stay on the pizza a hell of a lot better than the stuff that comes crumbled into little balls." Wrong. As I bit into the first slice, the sausage just rolled off the cheese. Note to self: Sausage cubes are less likely to adhere to cheese than most other forms of pizza sausage. 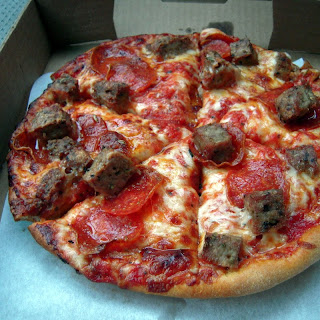 Square Sausage on a Round Pizza


The crust was of a medium chewiness (similar to Pizza Hut, but more "bready" and much better). The sauce is bright red with a kiss of sweetness to it. Pizza Roma is not what I would consider a greasy pizza, either.

Overall, I think they represent a good neighborhood restaurant with good value, but not one that I'd go out of my way for.