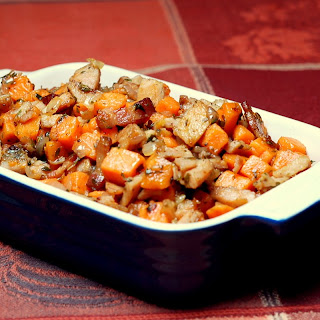 Turkey & Sweet Potato Hash
As far as holidays go, Thanksgiving is by far and away my favorite in terms of food. Give me a smoked turkey, stuffing, cranberry sauce, and a bevy of desserts and I'm set. Follow that with a day off, endless football, leftovers, followed by the weekend, Ohio State/Michigan, more leftovers, followed by another day of football, and more leftovers (with all of the previously mentioned events being washed down with seasonal beer), and you have one hell of an awesome holiday.

So how does one spend the night before Thanksgiving? At our house we made up a holiday called "Thanksgiving Eve". This unofficial holiday is for those who have to go to a restaurant on Thanksgiving Day.

The short story is that my sister, who is a nurse and was supposed to host the dinner, had a scheduling snafu at work and couldn't hold it at her house. I totally understand her situation, and by no means am I complaining about going to a restaurant for the holiday. We'll go and have fun, but it isn't going to yield much in the way of excess food.

This is why we're celebrating Thanksgiving Eve. If one is to wash down leftovers with seasonal beer, one needs a dinner that will produce said leftovers.

Without going into great detail, Thanksgiving Eve is going to yield much turkey. If you look at the news stands, all of the magazines are rife with articles about what to make for the big Thanksgiving holiday. What you don't see a lot of, are recipes that tell you what to do with all of that leftover turkey you have afterward - after all, a person can only eat so many turkey sandwiches.

This recipe is one that doesn't require bread or mayo (thank god). Both of us like having this for an after Thanksgiving (or even after Thanksgiving Eve) dinner. What I like is that it's one or two clicks removed from being too Thanksgiving-y, yet still firmly rooted in autumn. You'll be doing yourself a favor if you use a really smoky, high quality bacon in this dish. Here is a printable version of the recipe at Finecooking.com

Turkey & Sweet Potato Hash
by Allison Ehri Kreitler Cook the bacon in a 10-inch skillet (preferably cast iron) over medium-high heat until crisp, about 4 minutes. Use a slotted spoon to transfer the bacon to a medium bowl. Pour off and discard all but 1 Tbs. fat. Add the onion and cook, stirring occasionally, until softened, about 2 minutes. Add the sweet potatoes, broth, and butter to the onions. Simmer, uncovered, until the sweet potatoes are just barely tender, about 6 minutes.

When the potatoes are barely tender, add the turkey mixture to the skillet. Cook over medium-high heat, firmly patting the hash down and then occasionally flipping, scraping the bottom of the pan with a metal spatula and patting down again, until the broth has completely evaporated and the hash is nicely browned, about 8 minutes (reduce the heat if the hash is browning too quickly). Season to taste with salt, pepper, and hot sauce.