The Anatomy of a Food Vacation

There was a time that my work space at home was nothing but piles of magazines containing endless bookmarks on places of interest for out-of-town dining or food related stops:Everything has its place - and if it has to do with food and travel it was covering up my immediate living space.

I found that one of the biggest downfalls to pile making was the disorganization of it all. You've been hoarding this information for months, if not longer. The end result is a lot of piles: you've got a San Francisco pile (huge), an NYC pile (also huge), a Portland pile, and a miscellaneous pile of random places that were totally mixed together. So you're ready to head out of town to San Francisco and the week before you leave, you decide to start sifting through all of your Bay Area stuff. After ten minutes you've slogged about a quarter of the way through this insane stack of shit and decide maybe you should pack first. Realizing you don't really want to do that either - you choose to do the logical thing and go on Chowhound to look for more stuff.

The night before your flight comes. You've now decided that you'd better get it together and develop some kind of itinerary. Paralyzed by the fact that you have no idea where these places are in relation to each other, and that the weather forecast says it's going to be in the 80's (yes the 80's in San Francisco) for the next five to seven days, you realize you are screwed. You have no idea where the hell your going or whether or not to put your complete trust in the weather man and pack *gulp* lots of warm weather clothes. You decide to do the next logical thing - wing it. It worked in college, right?

Afraid that the weather man was playing a joke of LeBron Jamesian proportions, you pack as though it's not going to be in the 80's for the next seven days (It wasn't. It was in the 90's for a couple of those days). You spend the next seven days walking up and down the streets of San Francisco going to shops you really don't feel like going to and eating at places you really don't feel like eating at. Not realizing that nowhere in this town will you find air conditioning, you end up spending the better part of a week suffering from a severe case of swamp ass. It's on the flight home that you begin to kick yourself knowing your trip could have been sooooo much better if you would have been able to dislodge your head from your ass long enough to make a sensible itinerary. If only you had your act together.

My New Year's resolution was to get myself organized. It's September...just in time for me to make good on that resolution.

It just so happened that during a brief [and by brief I mean no longer than a 4 to 90 minute] workday internet interlude - I stumbled upon the almighty Google Maps.This wondrous little tool allows you to catalog all of those little places that you see during the course of your magazine or newspaper reading, television watching, or internet trawling. Any possible scrap of pile making medium can be put into a map, with any kind of theme, for any kind of geographic area, complete with notes on how you found it and links to where you found out about it.

Google maps was about to make my travels a whole lot easier...

You can actually collaborate with other people on maps, as well. Regina and I pretty much added and subtracted stuff from the San Francisco map over the course of the last few months. All you have to do is give the person permission to collaborate and you're ready to go. Maps can also be made public or private. Often times people will ask me where to go in certain cities and I just email them a link to the map so they can see it. 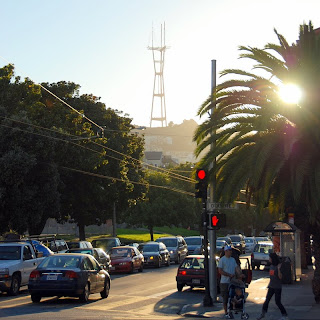 
As our trip got closer we began to organize the individual stores, restaurants, and activities into more localized areas so we could spend a day or two in a neighborhood instead of haphazardly crisscrossing the city. This turned out to be a huge time saver because you could see just how close or far apart some of these places really were.

You can organize it anyway you'd like, but we decided to do ours chronologically (see the left hand column of the screen). We basically organized it by day (only downside - I wish there was a way to put a header in between certain areas to separate them by day).

The chronological order worked out great when I opened it up on googlemymaps on my iphone. While mymaps on the iphone doesn't maintain the different icons you use on your regular Google map, it does locate all of them on a map so you can use it to navigate to those locations. There's also another app I've been playing around with called UpNext 3d that has some promise...too bad I found it after the trip.

I realize that most people aren't as fanatical as I am when it comes to this stuff, but I think regardless of whether you're a zealot or not, Google Maps is the perfect vacation planning tool.

This ended up being our map for last week's trip. Most anything near bottom of the list, we didn't get to, or was closed due to renovations or a day off. With the exception of Hawai'i (which is pretty damn easy to plan for due to the relatively small number of restaurants), this was by far our most organized and enjoyable vacation ever.

I would suggest viewing the larger map since smaller one is pretty hard to read.