What about Bob's? (Yeah, that's the name of the business.) 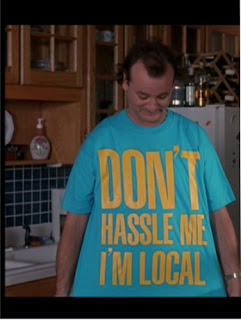 
Make sure to check here for more Cleveland posts

I've heard nothing but great things about a little sandwich shop in Willoughby. They were pretty busy when I visited, so I didn't want to bother someone about the genesis of the establishment's name. The only thing that comes to mind is Bill Murray's OCD character in the '80's movie What about Bob.

Though the menu has 10 different sandwiches on it and 10 different wraps the prices are pretty easy to remember: $3.99 for a 12" $6.99 for a 24". As is my usual custom when trying a place for the first time, a straight forward signature sandwich like the Bob's Ultimate Original Sub was ordered.

The crew of four or five work together like a well oiled machine to crank out these monsters. WAB's? does a huge lunch business so efficiency is an absolute must. Probably two minutes after I placed my order the sandwich was wrapped and ready to go. I had to get back home, so I didn't stay there and eat. They have 3 or 4 tables that have a lawn furniture look to them (so do the chairs), with a television running in the corner.

The first thing you notice about these sandwiches is the heft. As I opened the wrapper the next thing that jumped out at me was the beautiful french baguette they serve. I don't know if they make their own bread or not, but the quality of the bread is almost in the same league as Sarcone's Deli and Primo's Hoagies in Philly. (Both make their own bread so it's not out of the realm of possibility that WAB's? does as well). 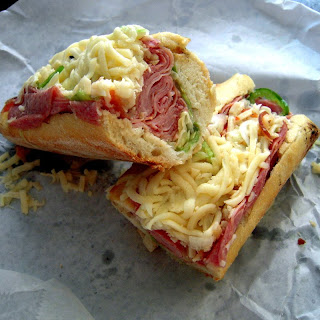 How in the HELL am I going to eat all of that?


WAB's? follows its wonderful french bread prelude with the guts of the sandwich backing up the promises made by the beautiful bun. On the first bite there's a little bit of everything ...meats...cheeses....vegetables....sauce. Everything makes its presence known as you make your way through this very filling sandwich. The onions are finely sliced so that their essence is evident but not clumsy and overpowering. The meat and cheese is generously spread throughout so as to not end up with empty bread on the last few bites. (Or worse yet, have a quarter of the bun left when you suddenly feel that last bit of meat squirt into your mouth like a small turd.)

I can't say that I understand the name, but the next time I stop I'll ask about it. As far as hoagie style sandwiches go, WAB's? pretty much smashes everything else I've had in Cleveland. If there IS a better sub, I'd like to see it.

Email ThisBlogThis!Share to TwitterShare to FacebookShare to Pinterest
Labels: Cleveland, East Side, Sandwiches