Some food experiences burn such a vivid memory in your mind that they are destined to go down in your personal “Dining Hall of Fame”. I have been to Alan Wong’s twice now and I think it is safe to say that this an absolute must go restaurant when visiting Oahu.I often find that I remember bits and pieces of what I had when I’ve gone to memorable restaurants, but what about when you remember nearly every aspect of the dinner?

Both times we’ve gone we’ve requested a table on the terrace. The window runs the length of the room offering a sweeping panorama of everyday Honolulu. The outward view of the mountains with houses clinging to their steep slopes, a cityscape below, and the low hanging misty clouds set the tone for not kitschy luau fare, but a cuisine that is as representative of Hawaii as the scene outside its window. 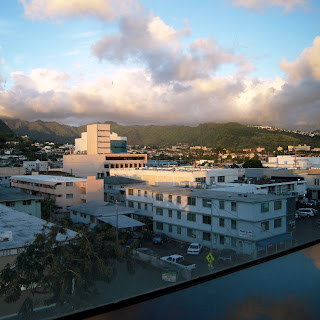 A View over King Street


Upon our return to Hawaii, one thing was certain - we were going back to Alan Wong’s. This time we weren’t going to repeat a critical mistake we made the first time, which was eating too much for lunch. This time, having half starved ourselves, we sat down prepared to eat and to not commit the crime of leaving anything on our plates.

When I go to a nice restaurant I expect it to have a certain level of service, but the wait staff here is especially impressive. We peppered our waiter with a number of questions from the origin of the fish to the components of complex dishes. It was as if the chef himself was talking with us about his creations. The staff greeted us with personalized and signed “Happy Anniversary” menus. This is just one of the “little things” that cumulatively equates to a fantastic dining experience.

I will admit, on this trip I was as fat as I have ever been in my lifetime. The five course tasting menu would be a moderate challenge for the average person, but for someone with the stomach room I had this would be a breeze. Consisting of an Alan Wong’s greatest hits of sorts, the tasting menu offers up wide range of fan favorites (pictured below). While the price for the tasting is $75, I can say that relative to the tastings at other places doing this caliber of food it’s a more than reasonable price. 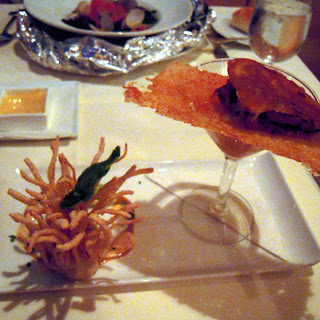 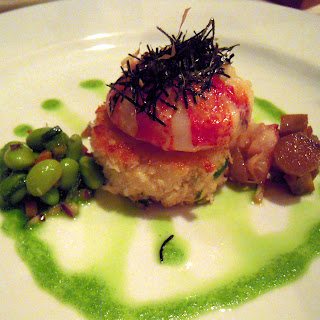 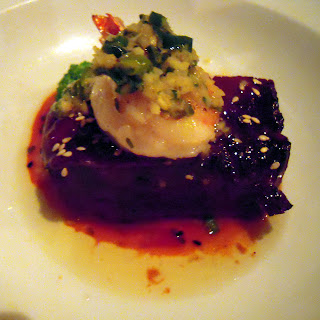 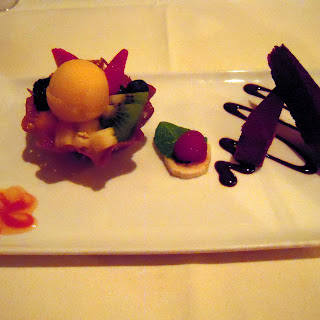 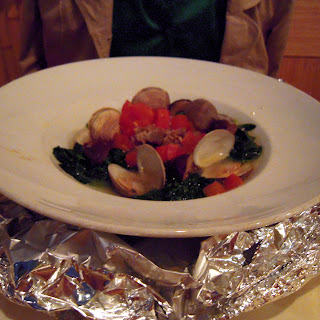 Regina started with “Da Bag,” which is worth it for the presentation alone. A giant foil wrapped dish is brought to the table (reminiscent of Jiffy Pop) and once pierced open by the server, you have steamed Clams with kalua Pig, shiitake mushrooms). 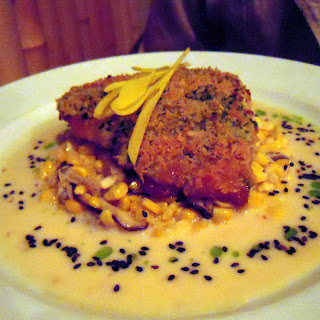 
If I could have one dish in all of Hawai’I it would be Alan Wong’s Ginger Crusted Onaga, Long-Tail Red Snapper with miso sesame vinaigrette, organically grown Hamakua mushrooms and Corn. I had it in my tasting menu and Regina ordered the full portion. This recipe is actually in the Alan Wong cookbook and came out surprisingly close to what is served in the restaurant, Onaga is just a pain to find in Ohio. This dish is an absolute monster. 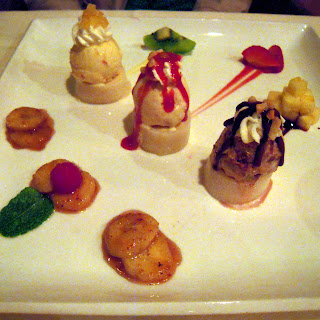 
While I had my hands full with my tasting menu, Regina decided on the New Wave "Banana Split" which consisted of mochi wrapped banana ice cream topped with chocolate-macadamia nut crunch, kula strawberry-hibiscus & coconut house made ice creams. They also surprised us with a complimentary dessert that had a "Happy Anniversary" message on it. 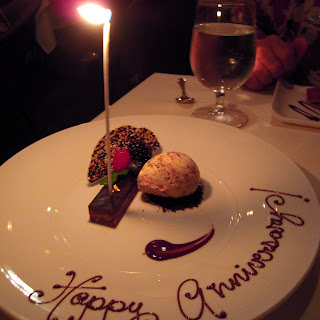 One of the criticisms I often read about Alan Wong's is that the area around the restaurant is in is ugly. When people think of Hawai’i they don’t think of restaurants in the second story of an office building in the middle of a commercial district. Why should I have to get in a taxi and go there, when I can just walk to one of the many restaurants on Waikiki and get Hawaiian food?

When we had the pleasure of meeting Alan last year we asked him, “What’s the deal with King Street? How did you end up choosing that place?” He told us that an owner of a local fast food chain told him that King St. was prime real estate. He said that all of the people that lived in those houses up against the mountains had mortgages that were paid for and would support a high end restaurant that put out a great product. Alan told us that he has had offers to go to other locations but would never think of leaving his beloved King St. location.

The first time I came Wong’s restaurant I was afraid it was going to be a tourist trap with cartoony Hawaiian food. I couldn’t have been more wrong. This food is an aggregate of Oahu’s diverse cultural influences (Korean, Chinese, Polynesian, and Japanese). The product is decidedly local and of tremendous quality, the flavors are authentic, and service is the definition of the aloha spirit. The experience Alan and his staff offer is as real as the view outside the King St. terrace window.