This was the year my sisters and I decided that the hosting of Thanksgiving would rotate between the three of us. Since Darcy hosted it last year, and Bridget is nearly eight months pregnant, it made perfect sense for me to put on this year's feast.

I don't think too many people would argue with the notion that this holiday is logistically the most difficult to host. I think it's one of those things that doesn't really dawn on people just how much work goes into hosting one of these things until they're faced with the task. Since this was the first time we had hosted this holiday since coming back to Cleveland, I decided to try and address some of my pet peeves from Thanksgivings past.

Eating off of paper plates with plasticware whilst sitting on a couch with three other people.

This was the year that there would be a seat for every man, woman, and child. With the help of Mike aka Cheesecake (my brother-in-law), we were able to shuttle chairs, tables, china, and silverware from the west side to my place. Moving some furniture around at the house we were comfortably able to fit fourteen *scratch that* fifteen adults and a kids table of two. My mother is famous for bringing last minute additions without asking first. The same thing happened at our wedding. The key is to take as many things out of her control as possible, thus removing as many holiday monkey wrenches from her bag as possible.

Cell Phones
Texting at the dinner table pisses me off. Are you that disinterested with the rest of us that you need to constantly glance down at your phone? I'll tell you what, you fix the food and get everything ready and I'll text. Let's see where things go.

I collected them all at the door, and they went into a glass vase. As was predicted, the teenagers were gobsmacked, immediately breaking into a cold sweat. Everyone, but my brother-in-law Walt, gave there's up. He refused. I lost face with the teenagers (who were in obvious pain), but what can you do. 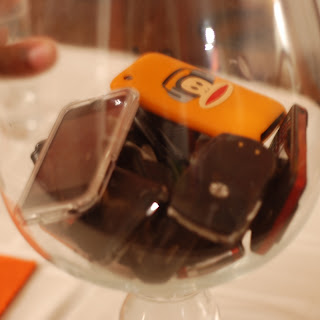 A Vase Full of Cellies


Being stuck talking with the same two or three people the entire time because no one wants to give up their prime seat
El Bulli this was not. They have twenty course meals, we had three. After each course everybody had to take their plate and silverware and switch to another table. My Dad, who is a confirmed seat planter, seemed very uneasy with switching seats. He had plucked a prime seat at the head of one of the table and thought he had it made for the next four hours. It was after the salad bowls were cleared that everyone was instructed to change tables. My mother, who had been stuck at the smallest table, chortled with joy at the announcement, while my dad tried to figure out a way to hang on to his precious seat. I think in the end most people actually liked the idea; the pleasure (and the pain) of conversation was equally spread amongst everyone.

People who arrive late.....way late
If there is one family member who falls under the category of "way late", it's my sister Jenine. She is typically brings a dessert to any family function because, well, that's usually when she arrives. This year I impressed the fact that we were sitting down to eat at 1:30 sharp and would begin eating with or without the habitual offenders (Jeanine and my mother being the other.)

This was the year that we made history, both of the way laters arrived on time. We witnessed history on Thursday. It was like seeing not one but two black swans in one day. We all savored the moment, unsure of when it might ever happen again.

Everyone bringing a dish, but either doesn't bring what they said they would bring (thus leaving a void in one spot and doubles of another), not making nearly enough to feed everyone, or the worst... bringing some sort of store bought cookie or veggie tray from *gulp* Giant Eagle
We commandeered the ship. The instructions were simple: Bring something to drink. My sisters have young kids, my dad has a penchant for under and overcooking pies, my mother likes to change her mind about what she's bringing depending on the amount of time she has.

This year WE were responsible for the food. Most purists would call what I did a cop out, but this is the way it went down. We decided on a salad course made from the Chef's Garden salad box, a quart of Moxie's cheddar vinaigrette, candied walnuts (which we made), bacon lardons cut from a 3# slab of smoked bacon in Fire's tandoor oven, and dried cranberries. This actually turned out better than I thought it would. I would kill for the dressing recipe because it's that good. We also served the epis from On the Rise with whipped thyme honey butter (which we made). It was a success all around - no salad, rolls, or butter left over. 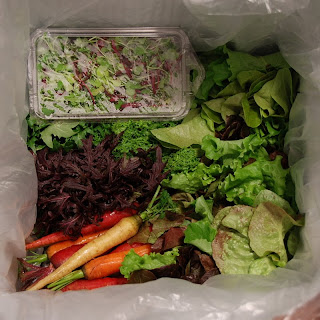 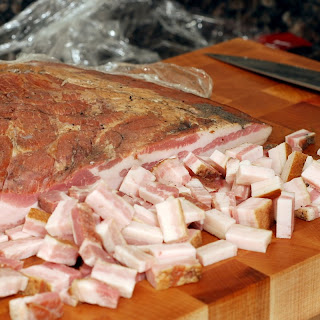 The dinner course was almost entirely purchased from Route 62 BBQ in Johnstown, Ohio. This is my absolute favorite barbeque restaurant in the state. A couple months back I tried their smoked turkey and was completely blown away. For Thanksgiving I wanted to go to there (an Office reference.) As luck would have it they offer Thanksgiving package that included a 12# smoked bird, mashed potatoes, gravy, stuffing, corn pudding, cranberry apple chutney, green bean casserole, and a choice of pumpkin or pecan pie. A pan of jambalaya (which is absolute sex in a dish) was thrown in by Route 62BBQ for driving down from Cleveland and getting two of these Thanksgiving packages. I'd do it again in a heartbeat - low stress and delicious food. Regina also added a cooked carrot dish since green bean casserole isn't her thing.


Dessert consisted of a pecan and a pumpkin pie that was included in the package from Route 62 BBQ, cranberry upside down cake (we made), and a pumpkin gingerbread trifle (we made), pumpkin loaf, and cranberry loaf (On the Rise). It turned out that there was plenty to go around. The cranberry upside down cake is very easy to make and will probably be in a future post because it's that good and that easy. The trifle was nice because all you have to do is make the gingerbread a day or so ahead and then literally whip up the rest the day of. 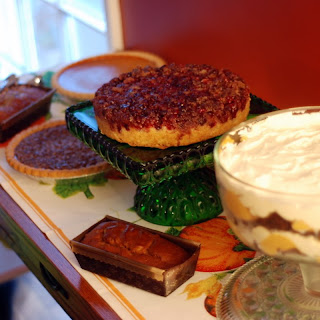 The Conclusion
Would I do it this way again? Yeah, I think I would. It's a pretty big undertaking. Without the collective help of others, it's a pretty daunting task. Lucky for us we are on the three year rotation, so we don't have to worry about it until 2012.

Mike,
Thanks for all your help (the shuttling of the furniture, the picking up of the food, and even going back and picking up more knives for you frantic sister.) I told Regina afterward that this was the first time in a long time we had 100% of the old Mike back. It felt like old times. If I remember anything about this particular Thanksgiving, it will be the time we spent getting this thing read, (for that I'm very thankful.)