I’ve seen a number of places that have tried to catch The Soup Nazi’s lightening in a bottle. While, at least in the US, soup is never going to overtake sandwiches as the preferred menu item for lunch, it does have a rather strong following amongst the bread averse. For my own taste, the options that I’ve encountered in Cleveland and Columbus have been of the “take it or leave it variety”. I don’t think it’s that these places are necessarily bad; it’s just that they don’t incite overwhelming lust. Then again, I’ve never lived in Ann Arbor, Michigan.

Around 11:30am, office workers start to make their way out of their cubicles with hopes of beating the lunchtime rush and not getting edged out of Le Dog's full array of soup offerings. With a rotation of over eighty soups, anticipation builds through the morning as they ponder the possibilities. The only exception to Le Dog’s “wait and see” menu is the lobster bisque that is served every Thursday and Friday. A word to the wise, if you want the bisque, don’t wait until 1 o’clock, it won’t be there.

So what’s up with the name “Le Dog”? Isn’t a hot dog stand? Well, yes and no. It may have started that way, but in my opinion the dogs are average at best. It’s more like a stand they sells four star soup, and two star hot dogs to those too stupid to eat four star soup. 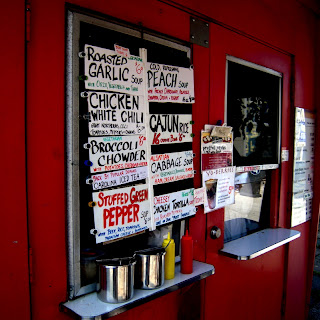 Many of the daily soups are based on the locally available produce. I think that what is most striking about their soups is the amount of "stuff" that each bowl contains. We've all had soups where the goodies are being stretched to the very edge of fraud - not here. Pickles that would normally sink to the bottom of the bowl are proudly perched atop a thick pile of Cajun rice. With the purchase of a bowl of soup you can also get a Zingerman's pretzel roll for a dollar. 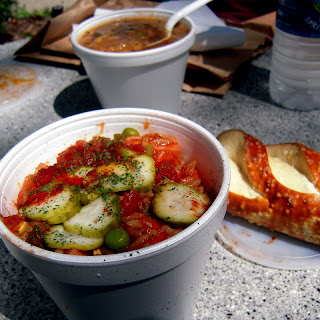 If you happen to be in Ann Arbor for lunch (especially on Thursday and Friday), you've got to stop at Le Dog. This is every bit as much an Ann Arbor institution as Zingerman's Deli.