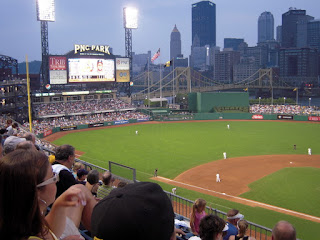 PNC Park (my favorite besides Fenway)

If you do any homework on the Pittsburgh you will ultimately end up with some mention of Primanti Brothers. The original store, which is where we visited, is located in an area of downtown known as “The Strip”.

Overstuffed sandwiches with mounds of slaw and fries (yes fries) are piled high on whatever you select. The “fries on the sandwich” trick, or technically in the sandwich, is a Primanti calling card of sorts. Are they only ones that do it? Probably not. Were they the first? Quite possibly.

The space is tight. If you’re familiar with another fat bomb sandwich spot in Cleveland called Melt – it’s about their pre-expansion size. Calorically speaking, both places probably wreak the same amount of waistband havoc.

Because Primanti’s reputation precedes itself, you can expect a considerable amount of both natives to the area, along with throngs of out-of-towners checking out what all the fuss is about, to be jamming the doorway. Lines can stack up quick.

When you first walk in it’s a bit confusing. There was no hostess (that would take up a valuable couple seats). You have to wait until a table clears and then make sure you make eye contact with the hard working people at the grill. They are the ones that give you the okay to sit down, eventually take your order, and ultimately bring over your food. Versatility reigns here. Think of them as the “Slashes” of Pittsburgh dining.

At the end of it day I’d say that it’s something, as an out-of-towner, you do once. If you’re from the area I’m guessing that there is nostalgic attachment that keeps people coming to this one. There are other outposts around Pittsburgh’s suburbs that are more like conventional restaurants with waiting lists and real waitresses. Like anything I guess nothing’s like the original.

Unlike some places that have gained national notoriety, Primanti Brothers has kept their prices at a very reasonable price point. While these aren’t the greatest sandwiches I’ve ever tasted (partly because I’m not a mixer and like my fries and slaw separate from my sandwich), they give you what you pay for – no skimping here.

What was I doing in Pittsburgh?

We went to PNC Park to watch the Indians…..where there’s a Primanti Brothers inside.