Best of the Wurst

While down in Columbus we were staying down at The Lofts across the street from the Hyatt. As a result, we decided to walk down to North Market for lunch both days. I have a tendency to lock onto a certain place and not let go.

Since I love hot dogs I knew what my NM stop was going to be. 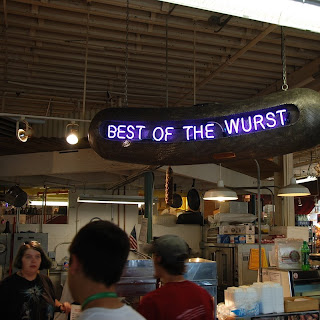 The last couple of times I had been there The Best of the Wurst was either closed or had too many people in line. This time I went on both Saturday and Sunday and they were open and had only a few people in line.

It’s a smallish hot dog stand that is run by three people (a girl that was taking orders and two guys that were cooking, one cooking dogs and the other on buns and toppings).

On Saturday I ordered the Italian Sausage. I was a little pissed at myself because there wasn’t really anything about it that blew me away, but why would it? It’s an Italian sausage!

Sunday was much better, I decided on the Blue Cheese Hot Dog which was very good. Topped with blue cheese and horse radish sauce, this is exactly the kind of thing I had hoped for the first time around.

Best of the Wurst is no Hot Doug’s but for Columbus it’s a viable alternative.