Holualoa is a an old town nestled up against the mountain about a five minute drive from Kailua Kona. As you make your way up through the town on Mamalahoa Highway you’ll see numerous art galleries. If you’re headed north and almost headed out of town you’ll see Holuakoa Café on your right hand side.

Parking is a little daunting because you have to hurry up and find your parking spot before someone whips around a corner and hits you. The signage won’t scream, “It’s right here!” Keep your eyes peeled for the strings of Christmas lights if it’s dark, otherwise you will see no sign. 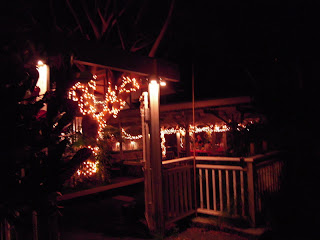 As you walk into the “dining” room you see that it is actually almost all outdoor seating with the majority of it being covered. With a meandering path as you approach the wait station, Holuakoa sets the mood very well.

Their menu changes daily, so the waiter was more than happy to let me take the menu home so I could remember exactly what I had. They gather as much locally grown, or caught, food as they can. As a result, the composition of the menu is constantly changing. 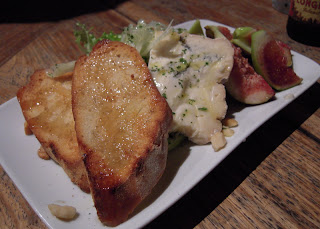 To start things off we ordered the Local Fig with Gorgonzola-Dolcelatte and Macnut Honey Crostini. The figs were good, but I could have fed my face with the crostini all night long. 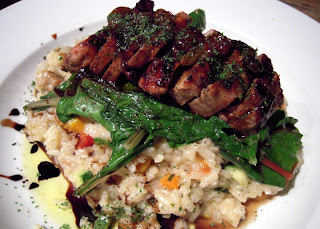 Regina ordered the Grilled Pork Tenderloin with Hawaiin Pumpkin Braised Baked Risotto, Baby Swiss Chard, Golden Raisin Merlot Sauce. She liked the tenderloin but thought there was way too much risotto. She was a little disappointed that there wasn’t more fish on the menu. 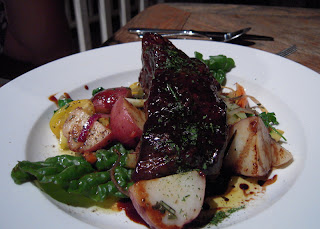 I went with the Red Wine Braised Local Beef Shortrib with Holualoa Rainbow Carrots, Heirloom Turnips and Red Bliss Potatoes and Cabernet Glaze. I, however, did not feel there was too much of anything on my plate. Everything but the bones disappeared from my plate. I thought the cabernet glaze particularly well done.

I was so stuffed from dinner that I couldn’t possibly eat another bite. The waiter had other ideas, though. He was able to twist my arm enough to get to take a piece of Lilikoi Cheesecake to go. I have to admit, it made a great snack later that night.

Creativity is abound at this gem up the hill. Portions are massive, so if you have a big appetite this is a place to try. Prices are inline with what you would expect from a nicer dining experience, but by no means as expensive as the resorts.

I think it would be a great place to finish the day after nosing around Holualoa for the afternoon. Be warned though, the town itself pretty much shuts down at 5pm. I think it should also be noted that they do serve what appeared to be an excellent brunch on Sundays.