This is just going to be a collection of different little things that I can’t justify putting into an individual post.

Grum's Sandwich Shoppe
The other day as I was driving up to Miles Market and saw the old Harvey’s Famous Ribs is going to open as a Grum’s Sub Shoppe. I have never actually been to the one in Cleveland Heights. Since they don’t really have a dining area I’m never in the area to take a sandwich home. The one in Solon will be on my way from Miles Market, so I look forward to the opening.

cleveland.com
This week I decided that the cleveland.com Food & Wine forum is officially unreadable. There are some people on there that are a real piece of work. I just can’t believe the amount of smack that is talked on that forum. Who knew there were so many experts packed into such a small geographic area? Good riddance.

Christmas Books
I ordered a book for my brother-in-law that is probably the coolest one I’ve seen this year. Keller’s Under Pressure: Cooking Sous Vide

To me, Eric Ripert’s On the Line

is the coolest book I’ve seen this year. I think Ripert and Christine Muhlke do a splendid job of explaining the inner workings of Le Bernadin. Complete with philosophies, diagrams, lists (like Cardinal Sins all 129 of them), and “a typical day of – (every duty in the restaurant), this book is chock full of every detail you’d want to know about a 3 star Michelin restaurant. The first half is all restaurant stuff, the second half is all recipes. I found this to be much more interesting reading than the narcissistic rants of Marco Pierre White in The Devil in the Kitchen: Sex, Pain, Madness, and the Making of a Great Chef

After I buy this one for myself, Marc Vetri’s II Viaggio Di Vetri: A Culinary Journey

will be my next buy.

e2
I don’t know if anyone watches e2 series on PBS, but it’s a really well done show. Every week the show touches on possible solutions to the environmental issues we face around the world. The last episode was named Food Miles, and discussed the issues we currently face with Food Transportation. I thought the inclusion of Judy Wicks, owner and founder of White Dog Café and White Dog Café Foundation, was the cat’s ass. I’m not going to go into a lot of detail; but she discusses the importance of locally sourced food and what can be done to foster the relationship between grower and consumer. You really need to see the episode to understand how remarkable this woman really is. Michael Pollan

make insights in this episode, as well.

Cleveland Christmas Basket
Speaking of locally sourced, I sent my boss my version of the gift basket. I find it interesting that we talking about local this and local that, but then send a gift basket from DiBruno Bros., Zingerman's, Murray's, etc. Why not send something from Cleveland? I sent a triple smoked Polish sausage from Chef's Choice Meats, a glass crock of Chevre marinated in olive oil and herbs from MacKenzie Creamery, Boeren Kaas Gouda from Buckeye Grove Farm Cheese (currently at Whole Foods), and Ripe From Downtown Salsa produced by Cleveland Botanical Garden's Green Corps program formulated by the folks at Sergio's Restaurants. I was actually pretty happy about the stuff I bought considering I had about a day to do it.

Shaker Farmers Market News
Last week I went to Berea to visit my sister. Whenever I go to that part of town I have to stop at Chef’s Choice Meats. I was very happy when owner Kris Kreiger informed me that he will be at the Shaker Square Winter Farmer’s Market when it opens in January.

Christmas Ale
I've heard different things from different people, but some like this year's GLB Christmas Ale and others don't. I would fall in the latter category. I think the spiciness is way overdone. My Christmas ale of choice has been from Anchor Brewery in San Fran. I think it's a more subtle interpretation than GLB's. I had bought some CA from Thirsty Dog in Akron, but after about the second bottle I decided it tasted a little too diluted. I made the mistake of not getting to Barley's, when I was in Columbus, to try theirs. At any rate, I had been getting the Anchor Brewing from West Point Market in Akron (man, do I love WPM), but my wife tells me they have it at Whole Foods and Heinen's on Green Rd. 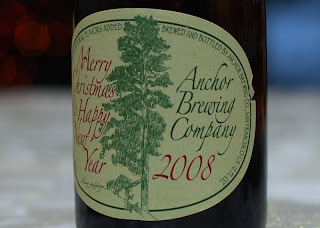