Catching up on Some Smaller Dining Experiences 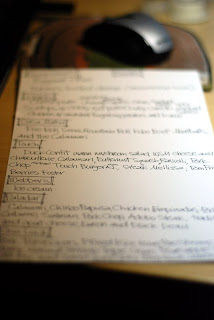 It always amazes me just how much food related stuff you come across in the course of a week. As we plow our way through the holiday season it seems like dining opportunities are abound. I've got a few places that I've kind of saved up, just because they were really nothing all that earth shattering.

You might be asking yourself why I even waste the time. I think reviews on the these types of places add to the body of knowledge that's on the internet. I can't tell you how many times someone has suggested a place, albeit small, and I have no idea if it's any good or not. I don't need much information; just enough to give me idea of what it's comparable to.

Flying Crane's Cafe
Some time ago, I had mentioned that Shaker Square didn't have any good places for lunch. Stuart Spivack informed me that Flying Cranes in Larchmere was worth a try. So I invited Stuart to join us for lunch on a Saturday afternoon.

It's a small breakfast and lunch place. They offer a wide variety of food both American and Asian. Regina ordered the Eggplant and Rice. It was a very basic dish with eggplant slices encircling a mound of white rice. I had the Naomi's Grilled Cheese, which was basically a ham with mozzarella panini. I thought it was very small for $7. Come to think of it, I don't even think it came with a side. Stuart's actually turned out to be the best. His was an Asian noodle dish that actually looked very good.

If you go, get Asian. It was my fault for ordering a sandwich.

Santo's Pizza and Pasta
I stopped by my Dad's in Berea. We decided to grab a bite to eat before I went home. I like Dante's pizza in Berea, but my Dad wanted to go to Santo's. I'd never been, so I figured what the hell. He and I shared a pepperoni and sausage pizza. I thought the pizza was decent. If I had to describe it I'd say it was your run-of-the-mill Cleveland pizza, nothing to write home about. My brother had the chicken parm which was also your run-of -the mill chicken parm.

In the end it wasn't bad, it wasn't good. You get what you pay for here, (which isn't a bad thing).

Weber's of Mentor
My Father-in-law's birthday was being celebrated late because he had been down in Florida, so Regina decided to get him an ice cream pie. I guess in the 50's, in the Higbee's downtown, they used to make a malted ice cream pie that was quite popular. Well, Weber's of Mentor sells that exact same pie. I won't go into great detail, but there is a good story (possible legend) that goes along with pie. While picking up the pie I had a vanilla malt and I have to say it was excellent. They still make ice cream with these machines from the '30's that are the only ones still in existence. I thought that was cool. Worth a trip if you're in the area.

Call before you go, I know they were going to shutdown for a remodeling.

Off topic
We watched Man On Wire last night. It was a very good documentary about a guy who tightrope walked between World Trade Center Towers 1 and 2. I think what made it such a good movie is that the tightrope walker, himself, did such a thorough job of documenting the whole planning process. I highly recommend renting this one.
Posted by Dine O Mite! at 11:04 PM