The Baricelli Inn is someplace I’ve wanted to go ever since we moved back to Cleveland. It’s been cited in a number of magazines and always ranks high amongst the other local eateries in town.

Baricelli breaks from tradition in the month of December, offering a lunch menu. Since it isn’t a cheap place I often like to test drive a restaurant at lunch time to see just what I can expect at dinner.

The first thing that really hit me was that it was very quiet. Even though there was music playing over the sound system I could hear every word the people were saying in front of and behind me. I’m not saying this was bad or good – just an observation. If I had one gripe it’s that the upholstery on the chairs seemed a little 1980’s, not that they are from the 1980’s they just looked like it.

We sit down and decide we’re just going to get an entrée and dessert. Since I had made a fairly rich dessert for that night’s dinner, I didn’t think it made much sense to gorge myself at lunch.

I ordered the Beef Short Ribs with Mashed Potatoes and Saba (which I forgot to ask what it is). There were haricot verts and a brown reduction on the plate. I’m assuming saba was the sauce. The short ribs were tender, the potatoes and green beans were good. At $18, I felt that I got what I paid for.

Mrs. Dine O Mite ordered the Crab Roll with Avocado Crème Fraîche on Focaccia served with a Roasted Vegetable Penne Pasta Salad. She liked the light and creamy crab salad. Since she isn’t much for pasta, I was nice enough to eat it for her. Weighing in at $14 she, too, thought it was a fair price. 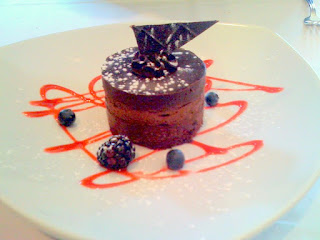 Dessert was an awesome way to end our lunch. The Chocolate Praline Gateau Torte was worth the price of admission. This is a definite candidate for my “Favorite Cleveland Dessert” category. This is a delectable stratification of chocolate cake, praline crunch, chocolate topped with chocolate ganache. This is a must try dessert.

I enjoyed my visit to Baricelli. Would I go for dinner? It’s a little too quiet for me. I think it’s a lot like Chez Francoise or Red, great food but is more of a special occasion kind of place.