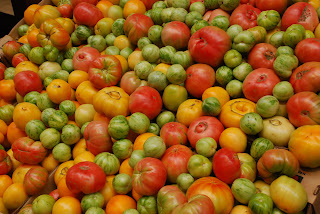 This past summer we had the pleasure of going to NYC and Philadelphia for a week. One of the stops we made was the Saturday morning Green Market at Union Square. I thought we had a really good farmer's market at Shaker Square until I saw this one. It was absolutely eye popping. Piles and piles of produce lined the L-shaped market. There was stuff I had never seen in those quantities and qualities before. Although I don't remember him specifically, Tim Stark of Eckerton Hill Farm was one of the growers at the market. After ten years of growing tomatoes he decided to write a book about the experience in, Heirloom: Notes from an Accidental Tomato Farmer.

Tim used to be a management consultant in New York City, but one day he decided to try his hand at growing some tomatoes at his apartment in Brooklyn. This decision would eventually lead him to move back to his childhood home in eastern PA and becoming a full time organic tomato farmer.

Stark is very good at layering each chapter in such a way that you get a real sense of the good and the bad that goes with making such a transition. He describes how he first got started with minimal equipment and even less hired help. How family and friends help keep him afloat those first few years.

I particularly enjoyed his chapters on the Amish. Stark talks in depth about the different sects and what made them split from each other. As it turned out, the author had more in common with them than he did with the conventional farmers around him. In the end it would be the knowledge from them that would help him better understand farming.

I particularly enjoyed the very end of the book because there is a fairly lengthy discussion about how hard it is to even have a farm that is within three hours of the city. Outlined are the issues growers in New Jersey, New York, and Pennsylvania face. 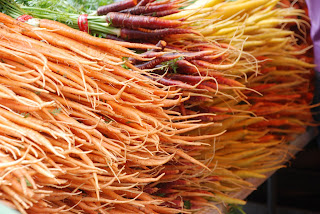 Land values in New Jersey are off the hook (and despite what people in Ohio might think all of New Jersey does not look like Newark; quite the opposite). He describes the carrots from a farm in Orange County (yes, where Orange County Choppers is, and no, it isn't south of LA). How the soil has so much peat carrots of all different colors seem to grow forever. I actually took the picture of these carrots [above] at the Union Square Market back in July, during our trip.

The book truly is an eye opener. There are times that I see these people at the farmer's market and think, "Man, they must really have the life." In a sense they do, but they work really hard for it. This book does a great job of showing the good with the bad. Do I think I could do it? I don't think so. I went to school to be a golf course superintendent, and I know how tied to the weather that job was. I would strongly recommend reading this book. If you enjoy local produce like I do, it will really open your eyes to what it means to be a local organic farmer.
Posted by Dine O Mite! at 8:05 PM