Pork Chops, Peaches, and a Grill 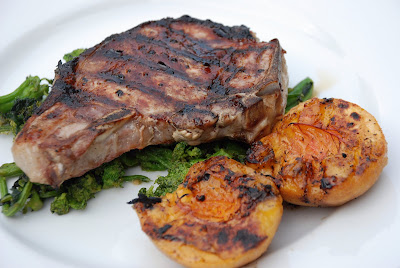 While I hate his new show, Mario Batali can write one helluva a cookbook. One recipe I found to be a little on the weird side for me was Pork Chops with Peaches out of the The Babbo Cookbook. In the past I had made Berkshire Pork Chops with a recipe from, Cleveland's own, Andrew Carmellini. One of the key components of Carmellini's recipe was to brine the chops. Since I had been doing this with the Thanksgiving turkeys for the past few years, I figured I'd give it a try on pork chops. For me brining was the difference between Mom's "bone dry, Shake 'N Bake, bible page thin, ultra lean, mass produced" pork chops and the "juicy, I don't know what this is on the outside but it kicks ass, will it cook all the way through it's so thick, I'm not eating all that fat (oh yes you will), butchered by the guy who knows where the pigs came from" pork chop. So after trying Carmellini's recipe I was now on a quest to see if I could find an even better brine.

It's true, there is more than one way to skin a cat. While I don't have a desire to find one way to skin a cat, I am interested in finding different ways to brine meat. Carmellini's recipe called for a brine of about 6 hours, Batali's is twice that (minimum). What's right? Who knows, I think they're both great. Although I haven't tried to do it, I'd have to believe that brining would at the very least help those lean, thin, grocery store pork chops taste better.

I think the type of pork and it's thickness make all the difference in the world. I've made Berkshire chops that were thick as hell and I swear I'll never go back unless I can't afford them. They are much more expensive. But I think they grill better because the fat is allowed to cook longer due to the thickness off the chops. The thinner they are the less margin of error you're going to have for overcooking them. The ones pictured here are on the thinner side. Admittedly they were cooked a little more than I like. As anything, I've found that when I make a recipe a third time, it's usually money. This was my second time. The culprit in this case was the thickness of the chops.

The part of this whole equation that makes this recipe a show stopper is the grill. I prefer to cook on a small Weber grill; fueled by lump charcoal. I like the fact that it burns clean and hot and doesn't start off with any chemicals. A chimney starter, some paper, and a match and you're ready to rock and roll. The other nice thing, I like, is that you can easily extinguish them with the cover and re-use the leftover pieces of charcoal. Like anything, they are little more expensive (and don't last as long), but I like them more.

So where's the recipe? Here we go:

From Mario Batali's The Babbo Cookbook

1. Place the chops in a nonreactive casserole. In a deep bowl, combine salt, sugar and about 2 cups of water and mix well. Pour the mixture over the chops and let them brine in the refrigerator for 12 hours or overnight.

2. Prepare a grill or broiler

3. Brush each pork chop and peach section with some of the olive oil, season both meat and fruit well with salt and pepper, and set the peaches aside. Place the pork chops on the hottest side of the grill and cook for 5 minutes on one side, then turn and grill for another 5 minutes on the other side.

4. While the second side cooks, place the peach halves on the grill and cook until lightly charred and juicy.

5. Place a mound of broccoli rabe on each plate and top with one pork chop. Garnish with the peach halves, drizzle both pork and peaches with the balsamic vinegar and serve immediately.

We also paired this dish with Batali's Broccoli Rabe with Garlic (you can see it peeking out from under the chop). For whatever reason, this side dish isn't a big item you'll see in Cleveland, but it's all over restaurant menus back in Philly. It's a wonderful alternative to broccoli or spinach. We found that both our local Heinen's and Whole Foods carried it (I think I've seen it at Fresh Market from time to time as well). You may need to ask someone in produce to help you find it, just make sure they don't accidentally give you Broccolini, which is not the same thing as broccoli rabe.

From Mario Batali's The Babbo Cookbook

2. Remove the first few papery layers form the garlic. Drizzle the garlic with 2 tablespoons of the olive oil, season with salt and pepper, and wrap tightly in aluminum foil. Roast until the garlic is very soft, about 40 minutes. Remove from the oven and, once cool enough to handle, separate the cloves and squeeze half of them from their skins into a small bowl. Set aside the remaining unpeeled cloves. Add the anchovy fillets to the squeezed garlic and gently mash together. Set aside.

3. Bring 4 quarts of water to a boil and add 2 tablespoons of salt. Set up an ice bath nearby. Blanch the broccoli rabe in the boiling water for 3 minutes, then remove with a slotted spoon and immediately refresh in the ice bath. Once cooled, drain and squeeze dry in a clean kitchen towel. Roughly chop the broccoli rabe and set aside.