Venturing into Enemy Territory (especially this time of year)

We had to come up with some sort of outing to go on while Mrs. Dine O Mite's aunt was in town. We wanted to do something relatively close to Cleveland (driving) but not too far. What we came up with is a trip to Pittsburgh.

None of us had every been to Frank Lloyd Wright's opus Fallingwater, in Mill Run, PA. We figured this would be the first part of the trip. Located just north of the West Virginia border, the property is located in a very remote area.

On our way down we decided to stop at at a little French eatery named Chez Girard. My wife called ahead and talked to the owners. They said that since this was their slow season they weren't open for lunch. However, if we wanted to come they would open for us!

Located in an old farmhouse, the interior was decorated in a French country style. The owner, who had a very heavy french accent came out and was our server. It was a three course menu for $24.

I ordered:
The guinea hen and chicken - was in the form of a roll. Not my favorite, but it tasted good.

The Leg of Rabbit - The meat itself was cooked perfectly, served with green beans and a very rich and tasty sauce.

Strawberry and Rhubarb Tart - Spot on. Very good. It appeared to be your run-of-the-mill pie crust type tart. Wrong. The strawberry and rhubarb was cradled by a spongy but firm "crust". It tasted like it was loaded with butter. When I asked our server she said that there was, in fact, very little butter in it. Unfortunately, I forget how she said they did it. Wins an award for best course the entire trip.

If you were making the trip down to Fallingwater I would definitely recommend stopping here to eat. It's about a half an hour or forty-five minutes from the Fallingwater. It's not worth driving solely out of your way from Pittsburgh, though. 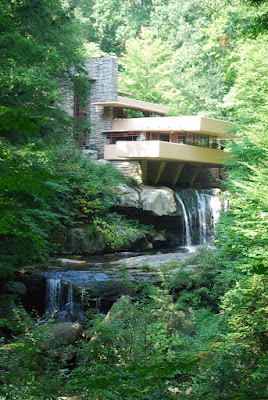 As far as Fallingwater is concerned, it's really worth a trip to come and see. It's an absolute marvel that this thing was ever actually built. All I can say is that you have to see it to believe it. Go when it snows, or is sunny, or the leaves are changing. A friend of mine said he went when it rained and it was very unpleasant. Fallingwater is one for the "Bucket List".

Afterward we drove toward Pittsburgh to Mt. Lebanon. For the past year I'd been working on a project nearby and always had dinner at Il Pizzaiolo. I realize there are a bunch of restaurants that go by this name. In fact, there is a very good chance we will be going to one in Oakland (sans "Il").

At any rate, the Antipasta Napoli is absolute money. However, I did notice this time it was a little smaller in size. It didn't really bother me because the four of us couldn't finish it anyway. Just an observation.

I ordered the Pizza Margherita with imported mozzarella di bufala DOC which stands for Denominazione di Origine Controllate (for more about what DOC is click here). Every week they get mozzerella di bufala fresh off the plane from Italy. The last time we ate here we had the misfortune of coming on a night they ran out. Typically they get the order in on Thursday. So if you want to order this don't come on a Wednesday night. The pizza tastes just like the stuff in Italy. It has a very puffy crust on the edges, and a very thin crust under the cheese and sauce. There's no pepperoni here, just dough, cheese, sauce, and basil.

My wife ordered the Pizza Bianca with Ricotta, topping it with mushrooms robbed off of the antipasta dish. It's her attempt at reliving the old days at NYPD Pizza, (she used to always get her slice with ricotta and mushrooms).

The next morning we went to the Carnegie Museum of Art near the Pitt campus in Pittsburgh. As far as art museums go I thought it was good. There was a pretty wide representation of art. My favorites were probably the Greene and Greene side chair and the six panes of Tiffany stained glass in the architecture wing. Overall, I don't think it's anything I'd make a special trip for.

Afterward, we got in the car and went over to "The Strip". A total of maybe 9 blocks and packed with people, The Strip was really a little bit of a let down. With a smattering of bars, restaurants, and shops I didn't really see anything that seemed all that unique or of "Pittsburgh Institution" quality. I can tell you this, these people are ready for the football season because there were tables selling Steelers shirts EVERYWHERE. It wasn't just two or three vendors. I'm talking about a ridiculous amount of black and gold. I've never seen anything on par with this in Cleveland. Absolutely staggering.

We stopped at Lidia's Pittsburgh for brunch. It was one price, $22, for the antipasti table, a second course, and a trip to the dessert table.

The antipasti table had some cured meats, fritatas, and some seasonal type prepared vegetables. I think the fritata may have been the best thing I had there. It was really light and not at all over-cooked. I typically steer clear of eggs of any sort that are set out on a table. These were very good, maybe better than Fire's.

For my second course I had the Piadina con Prosciutto Cotto, which is an Italian cooked ham and fontina cheese on house made piadina, a traditional flatbread from Emiglia-Romagna, served with twice-fried potatoes. Overall, I thought it was decent. I probably wouldn't order it again. With everything else, it was way too much food for me to eat. I think it sounds better on the menu than it is on the actual plate.

The dessert table had an assortment of Italian desserts. I opted for the tiramisu. What can I say, it's tiramisu, it's either bad or it's not. This wasn't bad.

My overall impression is that I would like to have had a regular lunch or dinner here. I don't like brunch because I hate eating that much food so early in the day. It makes me feel like going back to bed.

On the way out I spotted a coffee shop and figured I'd get a cup for the road. As luck would have it this was one of the lucky (or unlucky) owners of the Clover coffee maker. Howard Shultz tasted the coffee and loved it so much Starbucks bought the company. Now all of the independents who bought these machines are stuck with them. So how's the coffee? I can say that the coffee is pretty damn smooth. Reminds me a lot of La Colombe. I found that there wasn't the slightest bitterness in the after taste. For $3 I'd get it again, but I wouldn't make a special trip. I can check it off the list.

All in all, my trip to enemy territory was pretty fun. It really does look like a fun place to live. I just don't know if I could put up with all of the Steelers stuff everyday, though.
Posted by Dine O Mite! at 10:18 PM