Every morning my wife has yogurt for breakfast. She says that its cultures help regulate her digestion. I don't know how true this is. All I know is that when we go out of town there damn well better be some respectable yogurt options in the vicinity of where we are staying.

The yogurt snob refuses to eat anything that has artificial this or that in it, (think Yoplait). Dannon fruit on the bottom has always been her favorite. However, she doesn't like the fact that there's high fructose corn syrup in it (obviously not natural, but tastes good).

You name it, she's tried it. Stonyfield, Chobani, Brown Cow are just a few of the many that have been sampled over the years. Never quite able to find that perfect yogurt that had active cultures, natural ingredients, and good taste. Perhaps I should call it the "Trinity of Yogurt".

The Trinity had been elusive, always missing that one element. That is, until I unknowingly hit pay dirt just off Rittenhouse Square in Philadelphia.

How was I to know that a trip to my favorite bakery would end up taking me to points southwest of "Intercourse".

Late last summer we took a trip to Philly and the usual hunt for yogurt started the next morning. I told her to relax, I think I remember there being some yogurt at the bakery. Since I was going there for breakfast I told her I'd pick some up. When I got to the bakery, I nervously picked out some yogurt I'd never heard of, Pequea Valley. I took it back to the hotel knowing that it was probably going to be lumped with all of the other yogurt rejects.

So I walk in the room and say, "Here, this all they had."

"Pequea Valley? Never heard of it.", she sneered.

"Well, it'll it have to suffice, because I'm not spending my entire trip looking for yogurt.", I thought to myself.

She silently approved as she inspected the ingredients. All natural and has active cultures. Two arms of the Yogurt Trinity. My guess was that it was going to taste like shit.

I knew it. It did taste like shit. "There is no way I'm going back out to get yogurt.", I thought to myself.

"This is the best yogurt I've ever tasted."

I find myself on a country highway southwest of a town called Intercourse. I don't know how it got its name, but I have to believe there's a story there. If there isn't much of a story, I know there are a ton of bad jokes.

I'm headed to Ronks, Pennsylvania. In the middle of southeastern PA Amish country , and close neighbor to Intercourse, Ronks is also famous for being...the home to Pequea Valley Yogurt (best yogurt in the world according to my wife). 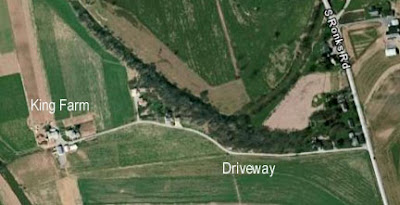 Based out of an Amish farm about a quarter mile off of the nearest road, Pequea Valley is run by Jonas and Rebecca King.

To be honest, I wasn't quite sure what I was going to see when I arrived there. As I drove down the quarter mile long driveway there were three other houses I passed before I hit the King compound. When I got to the end of the driveway I could see white turkeys running around, buggies parked in the barns, and a couple of little children playing in the yard.

I saw a girl that was about 10-12 years old and asked her where I could pick up the yogurt. Not saying a word, she pointed a timid finger toward a building next to the barn. 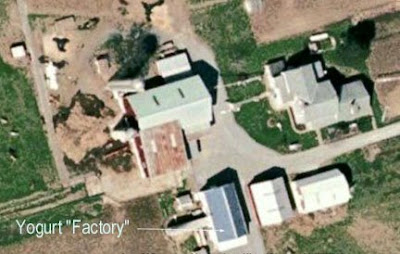 So I walk in the front door and it looks like any other front desk area you would find at a business like this. The only difference I noticed, was that there was a propane powered light mounted to the wall (like a Coleman lamp). If you look through the window in the door you can see these two big stainless steel tanks running in an adjacent room. No straw, no kids, and no wooden churners. Myth shattered.

When I called out for some help, though, no one answered. So I went out the door and around the side of the building and saw something I've never seen before...an Amish guy in a hair net. There sat Jonas with, I presume, his two sons eating lunch.

"Hi. Are you the person I see to get some yogurt?", I asked.

"A case of strawberry, a case of cherry, and then a few of the others so we can try them."

He came back producing a couple cases of cherry, four rasberries, and a chocolate.

"We won't have anymore strawberry until tomorrow. Is another cherry okay?"

"Yeah, we'll skip the lemon since my wife is allergic to it. She doesn't like blueberry either so I guess we'll just go with this."

I paid him a dollar a piece for the yogurts and packed them in my cooler. He didn't seem too interested in talking about the entire operation, so I just thanked him and left.

Why would I go all the way out there to get yogurt? Well, for one, I was travelling back to Ohio from a business trip. I wasn't that far off the beaten path, so I figured what the hell. But more importantly, this stuff is only sold a handful of outlets in southeast Pennsylvania. They lack a decent distribution source, so there I was, picking it up from their farm.

I'm not the yogurt conessuer that my wife is; I can tell you that this stuff has a really unique taste to it. I've included a photo of the label so you can see for yourself how natural it is. I've seen others that are all natural, but they don't taste anywhere near as good as this. My wife says, "It's like having ice cream for breakfast." That's a pretty good description. There is one caveat, Pequea Valley does have a few more grams of fat, but she swears they're worth it. 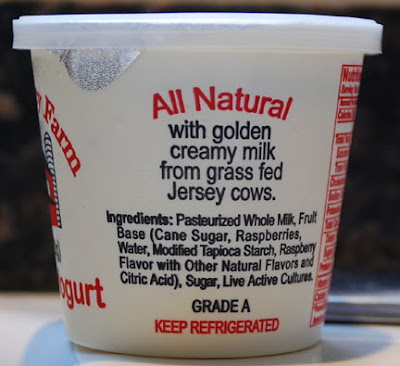 What I would like to do is get someone to carry it here. The product is superior to anything that is in stores now. If you have any suggestions as to how we can get someone to carry this stuff in Cleveland, please email me @ dineomite.blogspot.gmail. I do have some extras that we could use for samples. 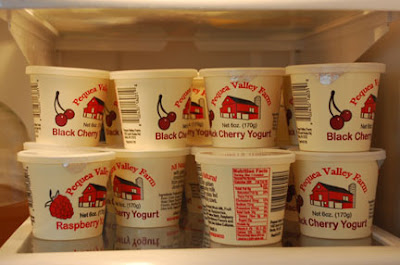